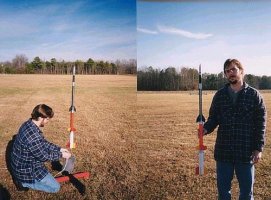 December 24, 2001, I received in the mail a set of Black Brant XII drawings and two photos from Goddard Space Flight Center. I had forgotten that I had emailed a request for scale data a month earlier. It seems that I was on NASA’s Christmas list that year. I didn’t hesitate to put the data to good use. I built and painted a fun scale model (see upper right photo) for sport flying in less than a week. It has a three-motor cluster in the booster, with one B6-0 vented to ignite a B6-4 in the upper stage. Two B6-4’s eject the booster chute. After the second flight and some cracked booster fins, I decided that B6-2’s in the booster would be safer.

In April I completed a fairly accurate scale model of the Black Brant XII to fly in competition (along with Jess’s Iris) at the Mick Wilkins Memorial Sport Scale Meet in Georgia on April 28th. This turned out to be a waste of a long road trip (albeit a fun one, nonetheless), since there were almost no other competitors. The updated model features more detail, along with a single D motor in the booster that operates the pistoning recovery system (this failed and had some bugs to work out).

Jess and I entered our models once again at RAMTEC-10 in Pennsylvania, June 15 & 16. We took third and second place, respectively. Because I had not yet modified the piston system, I opted not to stage, and so lost out on flight points needed for first place. For photos of ours and other Sport Scale models, go to our RAMTEC-10 page.

After RAMTEC I updated the fun scale model to utilize two C’s in the booster instead of 3 B’s. This method is more efficient for booster recovery and was flown twice successfully before I lost the upperstage sections in some tall trees.

In 2005, more than three years after building the Black Brant model, I was able to enter it again in competition–this time at NARAM-47 in Ohio. I had planned to enter my Saturn I model, but even after two years of on and off building, the Saturn was still not ready. I was able to finally modify the pistoning recovery system to eliminate some problematic friction, as well as incorporating dual streamers into the compartment.

After having the highest score (in Team division) after static judging, the model flew to 1st place. The staging/recovery system worked perfectly. Had our closest competitor not been disqualified on two attempted flights, we might not have won. But it’s pretty cool that we won the national meet with a three-year-old model, not to mention one that had flown twice already.

For anyone interested in scale data on the Black Brant XII, Peter Alway has included drawings of the prototype in his Rockets of the World 2002 Supplement.