The most difficult part for Jess to build was the booster with its supporting struts and clustered tube arrangement. The booster uses a stuffer tube with vent holes to facilitate gap staging. The stuffer tube, although non-scale, also makes for a sturdier model.

Future projects may include a Peanut sport scale version based around the BT-20 tube and possibly a Giant scale version in BT-80 size. Anyone who is interested in detailed Iris scale data, see the NAR Technical Services website as well as various drawings and photos on our site. 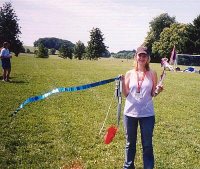 Left: Jess with her Iris after recovery at RAMTEC-10. The booster streamer deployed nicely, but one of the upperstage chutes did not deploy–two fins broke off on impact. Had everything worked flawlessly, she would have been only 5 points behind me!

Final Flight of the Iris

At ECRM-38 in 2011, Jess flew the Iris for the last time as a fun sport flight.  The upperstage drifted into the tall trees at the edge of the field and could not be recovered.  🙁 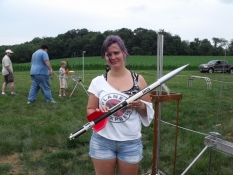