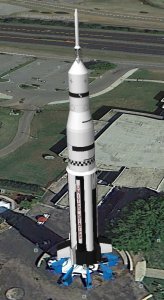 Back in 2011 I modeled a simplified Saturn I Block II representative of the one in the rocket garden at the U.S. Space and Rocket Center in Huntsville, Alabama, using SketchUp.  I submitted it for use in the building layer of Google Earth, and for the moment, at least, it’s still there.  Google announced back in 2012 that it will progressively replace the 3D buildings layer with stereophotogrammetry-generated 3D imagery.  That means, of course, that my Saturn I’s days are numbered, which is a bit of a disappointment.  I fell in love with that Saturn back in 1981-82 during my first visit to the Space Center, and I felt privileged to have my SketchUp model appear in such a medium that might benefit such a wide audience.

The 3D Warehouse page for the model is here.  It can be downloaded and opened in SketchUp, but bear in mind that the model was intentionally made lower-resolution (less complex mesh) per the submission guidelines.