With a Saturn I model in hand, Jess, Ben, and I drove up to Middletown, Maryland for the Extremely Cold and Rainy Meet (ECRM), I mean East Coast Regional Meet.  And yes, it was cold and rainy.  My primary goals were to enter my Saturn I in Peanut Sport Scale and to judge the A and Team Division models in that event.  Before scale turn-in, I made a couple attempts to fly my Big Bertha model in Random Altitude and set altitude.  The second flight (I was told) was tracked to four meters, due to a very loud motor “cato” which blew out the nozzle and left bright orange dots of tracking powder near the pad.  That was my last flight attempt for anything other than scale.  After lunch I shared Doug Pratt’s tent for judging models.  It seemed to take him five minutes to judge all the C division models, but it took me about three hours or so for mine, considering the miserable weather and occasional interruptions from interested bystanders.  I hope to judge again in the future, more efficiently, of course.  Overall, it was a good experience, in spite of having to judge one good-looking model “ineligible” for competition.  I was pleased with the overall scale model quality displayed at ECRM.

After the static judging, my Saturn was in first place.  The next day I had to balance flight judging and prepping/flying my Saturn.  It’s tough finding a break in the rain.  The Saturn flight was lower than expected, due to premature separation from the piston, but it was adequate.  I was glad to win, yet many of my C division competitors had transfered to Team division, so I had less competition than at last year’s RAMTEC.  Additionally, Jess was unable to complete (or even properly start) a model to enter for Peanut Scale.  So, victory could have been sweeter, but the trophy and the experience were still worth the bad weather and the drive from Virginia.

Apologies for the lack of scale model photos…  With the baby and judging, I forgot to take photos while I was judging!  Take note of Ben’s “pre-A division” name badge–custom made on Saturday evening by Chris Kidwell. 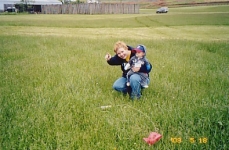 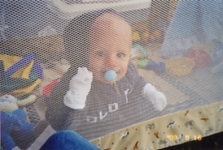 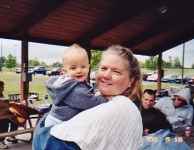 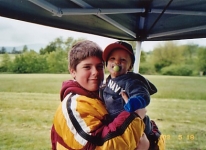 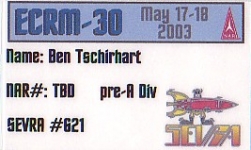