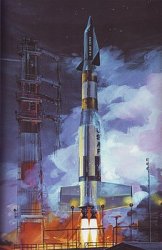 The Titan I w/ Dyna-Soar model was the first true team project for the Meatball Rocketry Team in 2005. It was based around standard ST-20 (2.042″) and BT-60 (1.637″) tubing, resulting in 1:59 scale, which is the same scale of the large Saturn I model that was in progress during that time. For a while I seriously considered modeling a proposed Saturn I/Dyna-Soar configuration in the same scale as a parallel project (an idea I abandoned for lack of data and time).

For primary scale data we referred to the Dyna-Soar book from Apogee Books and Jack Hagerty’s Spaceship Handbook. I found some additional data on the internet that helped with the Titan booster.

Kevin Johnson built the Dyna-Soar glider, I built the booster and applied the decals, and Jess did all the priming and painting of the booster. For my part, the most difficult component was the odd transition from the body to the glider’s base. The template used to make that part can be viewed toward the bottom of the page. This model won 1st place at ECRM-32 in Middletown, Maryland. Amazingly enough, the Dyna-Soar and booster did not come together until the night before the competition–with only minor adjustments being needed for a perfect fit (not to mention the US Air Force markings and clear coat I applied to Kevin’s glider at the hotel). 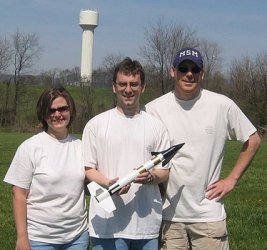 The Dyna-Soar’s glide during the two flights was less than ideal (a bit more like a spiral). It would have probably flown just fine if we had added some noseweight. Full Treatment of the construction of the Dyna-Soar glider by Kevin Johnson can be read on The Rocketry Forum here.

Long after our successful flight there was an unfortunate incident in Kevin’s apartment involving invading yellowjackets leading to Kevin jumping around leading to the model falling off his bookshelf. The fossilized remains were not worth preserving.

See below for several related photos.  Most photos are by Kevin Johnson.  Video by Jess.