Over the past several years I have been working on detailed CAD drawings of the Argo D-4 Javelin using materials and photos supplied by Bob Biedron, Taras Tataryn, John Langford, and Dave Fitch, as well as information obtained from real hardware. 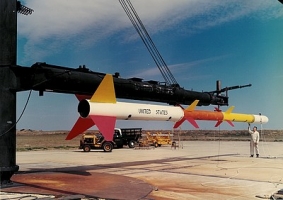 The Javelin has long been a popular scale subject for rocketeers, with award-winning models being entered in NAR competition by such names as Howard Kuhn and the Biedron-Langford Team, among others.  Although basic Javelin data is available in Peter Alway’s Rockets of the World, detailed drawings are more difficult to find. Those that do exist tend to disagree in various ways (this is fairly typical when dealing with scale data).  Some of the most sought-after information comes from a set of drawings done by Jon Randolph in the 1970’s as well as a similar set by Bob Biedron which he derived closely from Jon’s work.  Various Aerolab and NASA drawings, as well as data obtained from real hardware provide other important data and a basis for comparison with the Randolph and Biedron data.  When completed, the final form of the drawings may appear in Sport Rocketry magazine and/or as a NARTS scale data packet.