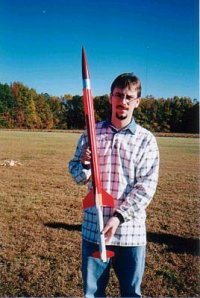 The Aerobee 350 project began in 1989 a few months after I joined the NAR. My interest was sparked by an article by Peter Alway on building an Aerobee Hi model. I ordered the NARTS Aerobee 350 data packet shortly thereafter.

My first Aerobee model was a non-detailed 2-stage sport model in 1:22.5 scale (BT-50 upper stage/BT-20 booster).  The best part (and most difficult to model) was the open-air framework between booster and sustainer, requiring a lot of filler and hand-shaping for a satisfactory result.  I spent an unusual amount of time trying to find appropriate fluorescent paint colors; several were tried on the model, but ultimately I settled for Testors Competition Orange , for lack of better options available in spray cans.  The booster fins were also basic non-fluorescent red and yellow.  It used a length of Thermalite running from the booster nozzle to ignite the upper stage and sheathed in masking tape to protect the finish (one of the photos below shows some heat damage from the Thermalite). Its only flight had a longer-than-ideal delay before staging, although recovery was still successful.  Photos of this model are shown below.

The second model was to be 1:13.439 scale (BT-60 upper stage/modified 29mm tube booster) and was intended to be a contest-quality project. I was fortunate to have met Bob Biedron while working on this model. His scale modeling expertise aided me in modeling the prototype’s details and complex fin shapes. My attention to detail also alerted me to some discrepancies between the NARTS drawings and NASA photos.

The inconsistencies in the data and frustration over the building and planning process led to putting the effort on hold indefinitely.  It was not completed as hoped, but I did revisit the project from time to time.  In 1995 I nominally “finished” the model, complete with several surface details, but the resulting model was less than flight worthy, due in part to a structurally weak design of the interstage struts and a unique, but odd stage coupling mechanism consisting of telescoping brass and aluminum tubing.  In 2001 I was able to use the disassembled parts from the 1995 version to make a fun scale “boilerplate” model to test a staging and recovery system for future models. Following a successful flight of the sustainer alone, the unnecessarily heavy two-stage model crashed (the extra mass was due primarily to too many layers of paint and primer, in addition to very heavy fins).  See top left of this page for a photo of the boilerplate model. 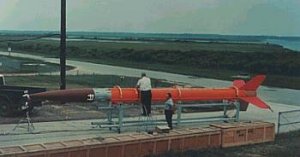 While additional versions were in planning stages, I decided to use a CAD program to make replacement drawings for NARTS. The drawings attempt to correct many of the former inconsistencies as well as incorporate more detail as seen in the photos.  Although my current (updated in 2002) NARTS drawings are an improvement over the previous ones, thankfully there was an even better data source waiting to be examined.

A real Aerobee 350 sustainer had been planned for exhibition at the Udvar-Hazy Center at Dulles Airport in Washington D.C, but due to logistical constraints, that plan was put on hold. Thankfully, I was able to coordinate a trip to see the rocket at the Smithsonian’s Garber Facility with Smithsonian Rocketry Curator Frank Winter. Local rocket friend, Dan Wheeler, accompanied me to take measurements and photos. A new update for NARTS is planned for Sport Rocketry magazine and/or NARTS, pending completion of the new drawings. 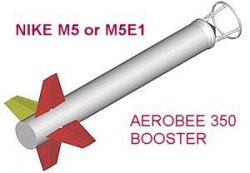 Ultimately I would like to build an Aerobee model in 1:10 scale. This could be based on the BT-70 with a BT-60 for the booster.  One of the most difficult details to model in 1:10 scale will be the booster thrust structure, the four struts separating the Nike motor and Aerobee sustainer. I plan to employ 1/8″ fiberglass or carbon fiber tubes in the BT-70 model to carry the flight loads.